First Fridays is taking a break.. 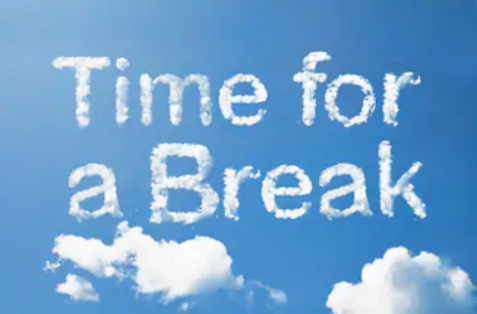 we want to thank everyone who has helped, funded, enjoyed, played, danced, met, munched and laughed with us. You all rule!! (and watch out for popup events over the summer 2019-2020 season)

A fun Friday fiesta, thanks for coming out to party everyone! Bit windy for some of the papercraft activities we’d planned, but So Samba our  band was sturdy and smokin’ hot & the paper flower crowns and dressup box were a hit. The biggest hit (literally! those kids went crazy 🤯 )Silvia’s fabulous piñata- thank you so much for making them!
Thanks too to all our sponsors, and everyone who dives in and lends a hand. The First Friday team has expanded this year to keep it rolling- so from me (Martine), Rebekah, and Tiff, Sandie, Emily and Silvia, thanks a bunch and see you in March!

a little bit of danc’

before it all went crazy! Beautiful pinata by Silvia Mendoza

and the crowd goes wild! 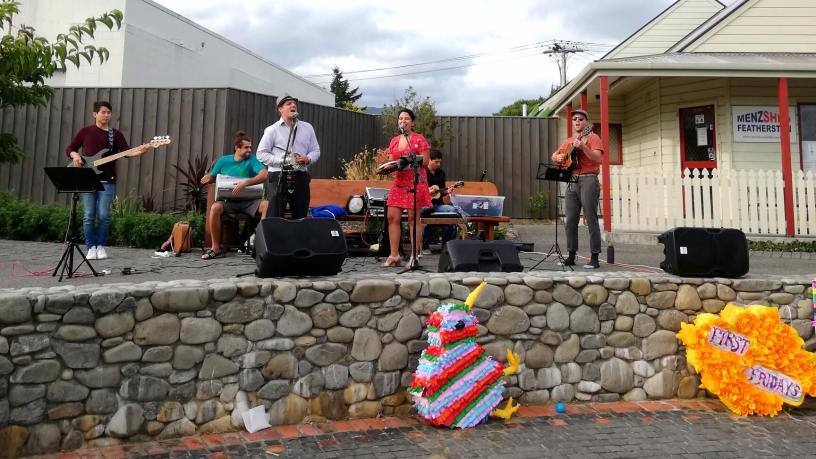 This month, we presented “Rub & Dub” …!
Rub-  truly street art: the art of street rubbings, to uncover the hidden treasure that is our everyday environment.
&Dub- chilling out to music by the mighty dj Steppa D, host of Radioactive’s reggae show ‘Roots and Culture’. Dancehall, dub, reggae- the sound of NZ summer. 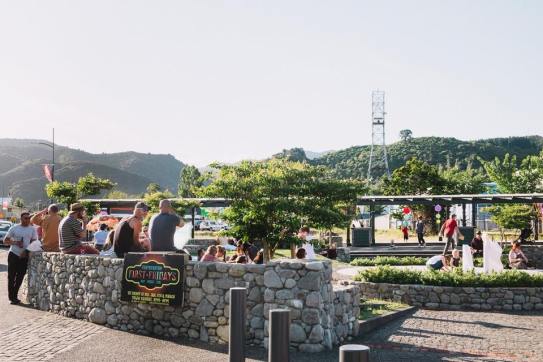 Rubbings were taken of the pavement, sculptures, all sorts, and assembled on a large baord, into a pattern. Watch out for this popping up later in the year!

All pics by Carly Webber. An artist engrossed in her work 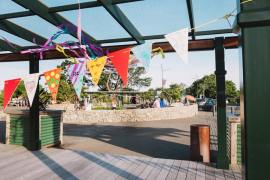 Bunting made at December 2018 event 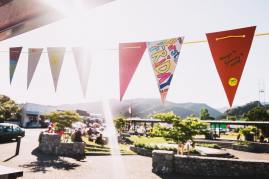 DJ Fuzzy spinning retro faves and pre Christmas parade fun for all- come along and decorate the Squircle, your bike, yourself.. for the Featherston Christmas parade the next day. Not in the parade? make a flag to wave in support of those who are.. 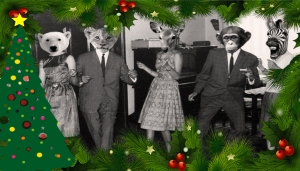 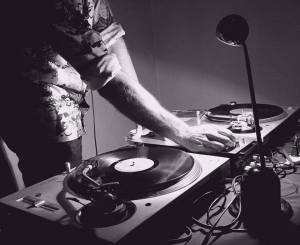 The ever-questing tunesmith was joined for the shows by SJD (who also co wrote songs on the record), friend and collaborator Anita Clark ‘MOTTE’, and multi-talented percussionist Chris O’Connor (Phoenix Foundation). Davidson recently wrapped up a European tour alongside Marlon Williams, this band was equally inspiring and they played a blinder of a set with two encores. Proper rock n roll, in Featherston no less.

FFF is proud to share with you some very special concerts in Featherston: ..as the dust settles on the Summer Season of Featherston First Fridays, and the nights grow longer, and winter is coming.. it’s time for less bad writing and more good music. Eb & Sparrow sold out in May, with the Kiwi Hall near capacity at 200+.

Next up was… Wednesday 8 August- Indian fusion band PANGAEA, from New Delhi.

Pangaea is a fusion of the best of Western and Eastern styles, by three well established international musicians who reside in Delhi, India: Performing an exciting mixture of Indian Hindustani and Western classical music within contemporary original compositions, combining the classical guitar and voice with the complex rhythms, scales, and improvisation of Indian classical music to produce a unique style of fusion.

The trio comprises of two of India’s most exciting young Hindustani classical musicians, Saptak Sharma (Tabla) and Mayank Raina (Sitar and Flutes) and New Zealand musician and composer Mike Hogan (Guitar and vocals). All three have gained a high level of recognition individually in their respective fields.

See some clips from their brilliant concert in Featherston HERE 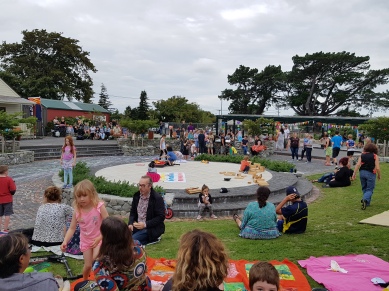 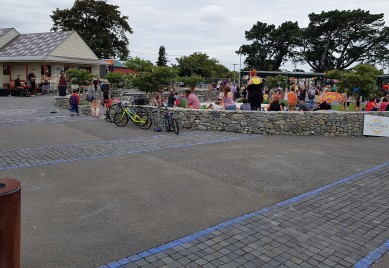 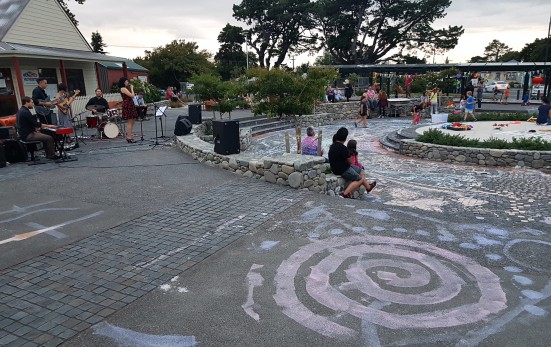 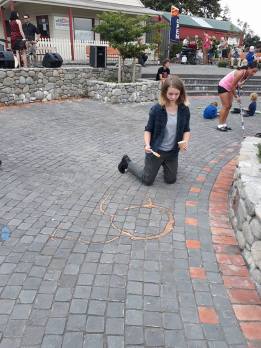 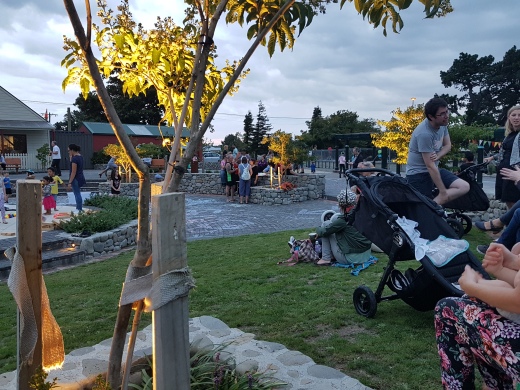 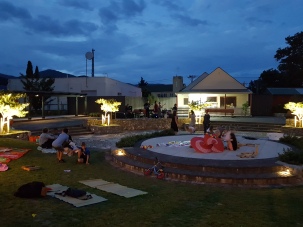 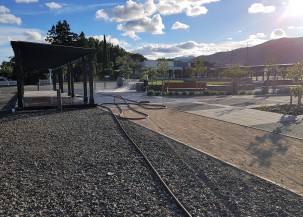 Final First Friday of the summer, and finally the weathergods were kind, and we were in the Squircle!!
‘Funk Force 5’ became ‘Jazz Force 5’ with a late lineup change due to a bereavement, thanks to Lauren for stepping in with Mike, Ayrton, Jacqui and Dan. Their smooth and groovy tunes were a great foil to the creative carnage of the chalk art..! This was great fun, with self portraits, spirals, spots and ultimately a free-for-all..Thanks to Martin and the Fire Service for helping cleanup afterwards.
Cheers to Erin and Tony who served up over 100 free sausages off their tiny BBQ, and Emily and Cheryl did a great job collecting community feedback about Featherston’s traffic issues: great idea thanks.
The Mini trains had a busy night after deciding to run the rides free- thanks team!!!
Thanks as ever to sponsors Creative Communities Scheme, Rotary, Featherston Community Board, Lee and KT- and all those who pitch in and help, and support Rebekah and myself with kind words and actions. xM

ANOTHER SOLD OUT CONCERT EVENT- THANKS EVERYONE FOR COMING TO 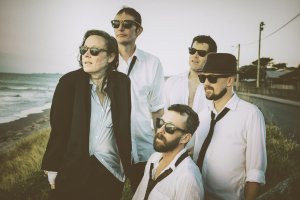 Supreme sweethearts of New Zealand alt-country, Eb & Sparrow bring their highly anticipated third record SEEING THINGS on tour throughout New Zealand with curated visual installation – a special one of a kind show. Written by front-woman Ebony Lamb and arranged by Eb & Sparrow, the new album was recorded in the historic homestead Ahiaruhe, in the heart of the Wairarapa, in January 2017. Utilising vintage recording equipment and instruments in the large wooden building to take advantage of the lush textures and presence, the band has pulled out all the stops.
Now in a show not to be missed, Eb & Sparrow return to the Wairarapa to showcase their sound and vision in Featherston’s beautiful and atmospheric Kiwi Hall.
Friday 11th May – 8PM
KIWI HALL – BELL ST, FEATHERSTON
$20 online  http://www.undertheradar.co.nz/gig/59053/Eb-and-Sparrow—Seeing-Things-Album-Tour.utr 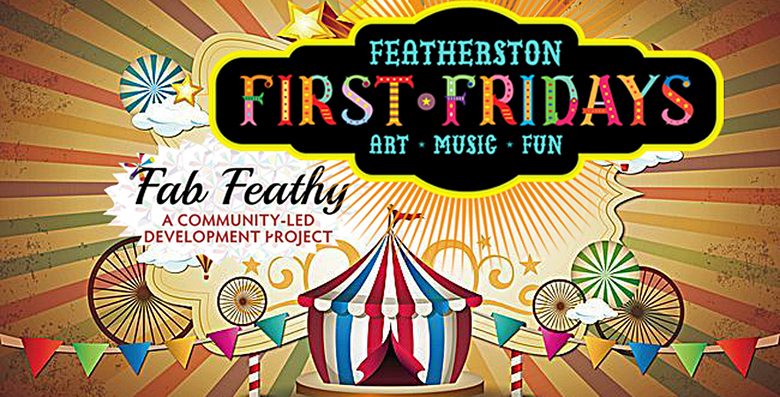 Roll up, roll up… !! Again blessed by the Interesting Weather of summer 2018, at the last minute it was deemed too cold and windy in the Squircle and we decided to use our indoor venue of the Featherston School Hall. Already warm and colourful, we added lanterns, glitter curtains, and a sprinkle of First Friday magic, and we were away. (With a little help from our performers…)

DJ So Dramatic, aka Nick Tawaroa got the night started with some excellent old school jams, while Sophia Therese and Ry from Wellington’s Circus Hub performed acrobatic feats to amaze young and old. Our other performer Nick Davies showed himself to also be a well balanced individual, with handstand balancing on a chair and hat juggling among his feats.

After a short dance performance by Justine Eldred, who is starting the Tangle Dance School in Featherston, the Fab Feathy group took the floor to talk about their exciting news.

Thanks to their work in consulting with the community and making the application, Featherston has selected for a five year partnership with The Government, to support us in community led development..

That’s cool stuff by the people for the people- that’s what First Friday’s are all about! We were delighted to host them at this First Friday for signing the papers with the Department of Internal Affairs, a ribbon cutting ceremony, and signing a creative pledge to work together.

Then it was back to the party.. with the free Flash Up Yourself glitter tattoos and face painting all night, once the free dressup box was opened on the dancefloor, and the bubbles came out, it was colourful creative chaos- great fun had by all.

Special thanks to Erin at Property Brokers, for persisting with BBQ outside in the cold so the kids of all ages could enjoy a free saussie- Featherston’s Own Op Shop for excellent additions to the dressups- and the Featherston School team for letting us use their space- kia ora x

Through the glitter curtain 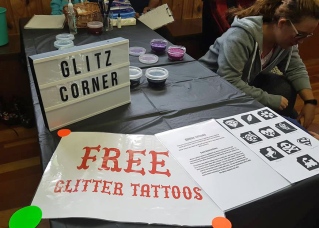 February 2018: Flash Up Yourself with dressups, glitter tattoos, and face painting

Winnie from the DIA and Kara of Fab Feathy 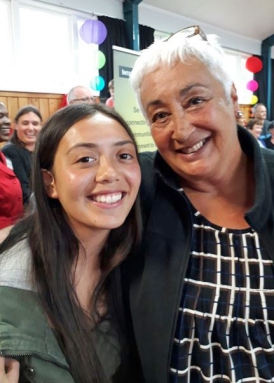 Fab Feathy’s Liz and her moko 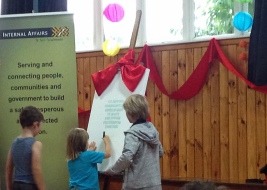 Bit cold outside for the squircle eh? 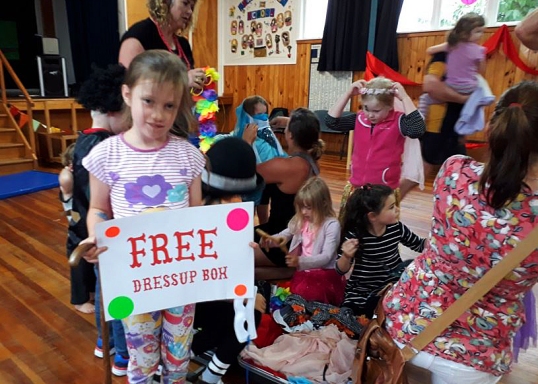 The dressups were a huge hit!

bubbles on the dancefloor 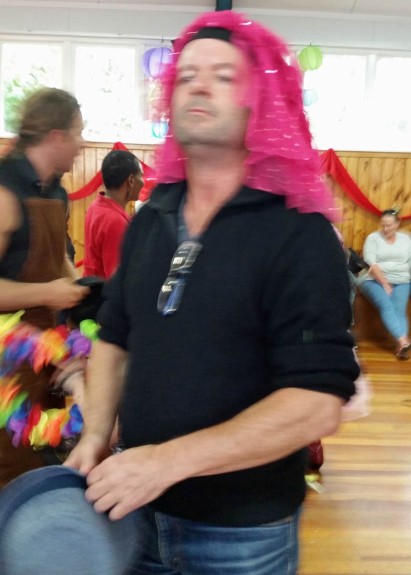 Every dancefloor should have bubbles and acrobats

Sorry First Friday fans, we were so disappointed the atrocious weather meant we couldn’t bring you “ New Year, New Yeah!” on Friday 5 January. Thanks heaps to DJ Stepper D (aka Dave Heath) for last minute cancellation- we hope to have him in Featherston another time! A Wairarapa resident who plays drums for a few local bands, Dave also DJs for Wellington’s RadioActive FM, as s a regular host on their reggae show Roots&Culture.

Over the years Rebekah and I have had some most excellent times under summer sun listening to reggae and dub music, so we thought what better way to relax into the new year, than bring a picnic to the Squircle and listen to some chill reggae vibes…? Alas it was not to be…

We were also inviting everyone to join us to bring even more vibrancy to the Squircle, with a challenge to colour outside the lines… this is an idea too good not to do, so watch up for ”Funk N Roll” in March for the Chalk Challenge to return! 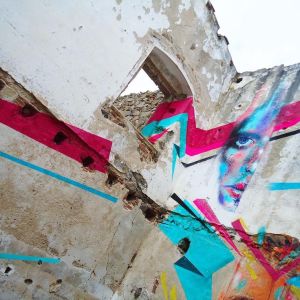